What Is The Flag Of Argentina?

There is a symbol of the sun called Sun of May displayed on the white band of the flag. The interesting fact about the flag of Argentina is this can be manufactured with two dimension ratio one is 5:8 and the second is 9:14. This flag is used as the state ensign as well as the National flag of Argentina.

What Does The Argentina Flag Mean?

The Argentina flag meaning varies according to the different colors and symbols.

The Argentina flag Sun meaning is the process of Independence that was started on 25th May 1810. The Sun of May which is centered on the white band is called the Sun of May because it is the replica of an engraving on the first Argentina coin. The coin was approved in 1813, whose value was eight escudos. And it has 16 straight and 16 waved sunbeams.

Now, you know about the exact meaning of each color and also the Argentina flag sign. Then, you should learn about the history of the flag.

The History Of Argentina Flag

The history of the Argentina flag will tell you about the past of the flag.

The Argentina flag was designed and created by Manuel Belgrano during the Argentine War of Independence. The idea of creating a new flag came into his mind after seeing in Rosario that both the royalist and patriotic forces are using the same colors, Spain’s yellow and red. So, he created a flag called the Cockade of Argentina which was approved by the First Triumvirate on 18th February 1812.

After that, he also created another flag after nine days of the war, and it used the colors that were used by the Coriolis during the May Revolution in 1810. This flag was used for many years. Many years passed and many flags came but the national flag was finally declared by the Congress of Tucuman on 2nd July 1816., shortly after the declaration of Independence.

The neighboring countries of Argentina are

Argentina is officially known as the Argentine Republic, is a country located in the Southern half of the South African continent. The Argentina capital is Buenos Aires.

The official language of Argentina is Spanish but other languages are Guarani, Welsh, Wichi, Qom, Quechua, etc.

The climate of Argentina has four types which are warm, moderate, arid, and cold.

The Argentine Peso (ARS) is the currency of Argentina.

The flag of Argentina map is. 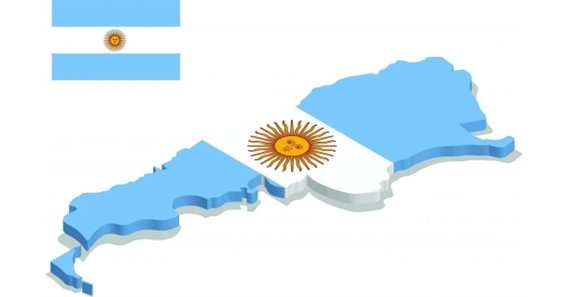 What Does Argentina’s Flag Symbolize?

Argentina’s flag symbol is the Sun which is called the Sun of May and it represents the Independence of the country.

What Is The Meaning Of The Colors And Symbols On The Argentina Flag?

The meaning of the colors and symbols on the Argentina flag is, The light blue color means the sky, while the white color means the clouds in the sky. Also, the symbol represents the process of Independence that was started on 25th May 1810.

What Argentina Is Famous For?

Argentina is famous for its Meat, football, Tango, Evita, Iguazu Falls, Patagonia, and many more things.

What Does Argentina Mean?

Argentina means Made of Silver, Land of Silver, Coast of Silver, or Silver colored which is the Spanish word.

Who Designed The Argentinian Flag?

The flag was created by Manuel Belgrano, in line with the creation of the Cockade of Argentina, and was first raised at the city of Rosario on February 27, 1812, during the Argentine War of Independence.

Why Are Argentina And Uruguay Flags Similar?

Argentina and Uruguay were part of the Provincias Unidas del Río de la Plata, so they both share colors and symbolism, although there are some differences. While Argentina’s flag has three horizontal bands and a sun in the middle, Uruguay’s flag has nine bands, representing the nine provinces the country had in 1920.

Above, I have given you the meaning as well as the history of the flag of Argentina in detail. The flag of Argentina looks like a peaceful sky or an ocean with the Sun of May displayed on the middle band of the white color. So, after reading this article you will never get confused and easily find the Argentina flag out of a bunch of other flags.

To Know Some Great Stuff Do Visit CrazzyCricket

To Know Some Great Stuff Do Visit CricFor

To Know Some Great Stuff Do Visit EagerClub

To Know Some Great Stuff Do Visit EarthCycle

To Know Some Great Stuff Do Visit EkSankalpJob

To Know Some Great Stuff Do Visit Cheaperly