What is The Flag Of Brazil?

The proportion of the Brazil flag is 7:10. In this flag, the green field and yellow parallelograms from the previous imperial flag were preserved. It was officially adopted on 19th November 1889, four days after the Proclamation of the Republic, to replace the flag of the Empire of Brazil. So, the meaning of Brazil flag is a must to know about the flag.

What Is The Brazil Flag Meaning?

The meaning of the Brazil flag will tell you everything about on which basis this flag was designed.

The blue-colored disc contains a total of 27 stars, and the brazil flag stars meaning is the size of the Brazilian state and the Federal District. And the motto appears on a band roughly coincident with the ecliptic. The single star lies above the band and it represents the large northern state of Para, which straddles the equator.

Now, you know the meaning of the flag of Brazil.  Let us learn the history of the Brazil flag.

The History Of Brazil Flag

The history of the Brazil flag is also interesting, like the flag of Brazil meaning. Therefore, you can easily understand it.

The previous flag of the Republic of Brazil has a green field with yellow-colored horizontal lines drawn on it. And it has a parallelogram of blue color at the hoisting end. Later on, the first flag of Republican Brazil with 21 stars was designed. Now, the current flag of Brazil is the second flag with 27 stars and it has been serving from 1992 to the present.

So, after learning the Brazil flag meaning of all colors and symbols, let us know which countries share a border with Brazil.

The neighboring countries of Brazil are

Brazil is officially known as the Federative Republic of Brazil and it is the largest country in both South America and Latin America. Let us know some facts about Brazil.

The official language of Brazil is Portuguese.

The currency of Brazil is Real (R$) BRL.

The climate of Brazil has a wide range of weather conditions across a large area and varied topography, but most of the country is tropical.

The flag map of Brazil is. 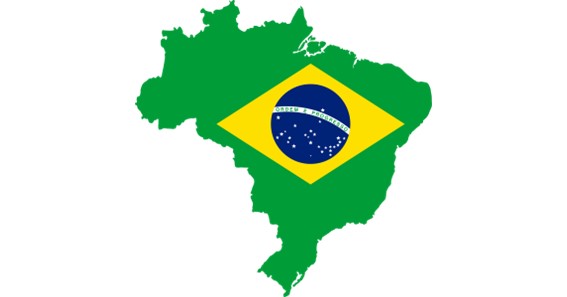 Why Does Brazil’s Flag Have 27 Stars?

Brazil’s flag has 27 stars because it represents the 26 states of Brazil and one of its federal districts.

When Did The Brazilian Flag Change?

The Brazilian flag was changed on 11th May 1992 and officially approved the current flag which represents Brazil to the world ever since.

What The Brazilian Flag Means?

In the Brazilian flag, the yellow color represents gold, and the blue globe, the green color, is a symbol of the flora and fauna of Brazil. And the stars symbolize the night sky filled with stars and constellations.

What Is Brazil Famous For?

Brazil is famous for various things such as the Amazon Rainforest and Amazon River, New 7 Wonders of the World: Christ the Redeemer, etc.

What Is Brazil Famous For?

Brazil is famous for its stunning beaches, rainforests, and diverse cities. It is known as the country of football with world-renowned footballers such as Pelé and Neymar born there.

What Type Of Meat Do Brazilians Eat?

Brazilians generally love to eat beef. The country is known for its all-you-can-eat steak restaurants. It is a leader in meatpacking. In fact, there are more cows than people in Brazil.

What Is The Story Behind Brazil’s Flag?

The green of the flag represents the family of Emperor Pedro I of Brazil, while the yellow diamond in the center of the flag symbolizes Pedro I’s wife, Empress Marie-Leopoldine of Austria, and the Hapsburg empire that ruled there. Inside the diamond is a blue circle with stars, an imperial coat of arms.

In this article, you have learnt the meaning behind Brazil flag and also the color combination of it. After reading this article, you can imagine a Brazilian flag in your mind and surely it will be the same as the original one. So, from today onward, you will never get confused after seeing the many flags and you will correctly choose the correct one. Now, you will never forget about the Brazil flag meaning.

Above We Have Written All About the Flag Of Brazil

What Is The Flag Of Country Brazil?

What Does Flag Of Brazil Symbolize?

What Does Flag Of Brazil Mean?

What Does the Flag Of Brazil Represent?

What Is The meaning of Brazil’s Flag?

How Many colors are In Brazil’s Flag?

The meaning of Brazil’s Flag

Which Colour is the Flag Of Brazil?

What Does Colours Of Brazil Mean?

Which Is The Flag Of Brazil?

To Know Some Great Stuff Do Visit remowz

To Know Some Great Stuff Do Visit clynerr

To Know Some Great Stuff Do Visit chenje

To Know Some Great Stuff Do Visit doescost

To Know Some Great Stuff Do Visit fyndblog