Why do you want to know about Brazil flag? Well, there may be lots of reasons but this single article is enough to tell you about the flag of Brazil. Yeah, in this article we will provide you with the detailed history and meaning of the flag of Brazil. Brazil is one of the known countries that is always lauded in the international news. Brazil or the Federative Republic of Brazil is the largest country in both Latin America and South America.  The country is famous for its surprising beaches, rainforests, and diverse cities. Brazil is also known as the country of football with world-renowned footballers such as Neymar and Pele born there. Let’s know about the Brazil flag.

What Is The Brazil Flag?

The flag consists of a green field and over it, in the middle, a yellow rhombus is positioned. Over the yellow rhombus, in the middle, a blue circle is positioned. And on that blue circle, a motto is written in a white stripe with green color. Besides the white stripe, a blue circle consists of 27 stars spread over it and these are white in color. In spite of all these designs and colors, the flag looks very simple and uniform.

Now, you know Brazil flag color and its designs, let’s know the Brazil flag meaning and its history one by one.

What Is The Brazil Flag Meaning?

Each and every color and symbol used in the flag of Brazil carry a special and hidden meaning within it. So, in the flag, the most prominent color is green, which represents the forest in Brazil and also the coast of Arms of the House of Braganza, the family of Emperor Pedro I. According to the new flag, the yellow color represents the Coat of Arms of Portugal and the House of Habsburg, the family of Empress Maria Leopoldina, the wife of Pedro I.

The blue color represents the sky of Rio de Janeiro on the night of November 15, 1889, when the Proclamation of the Republic took place. But in the old flag, blue means the blue sky. There are 27 stars over the blue sphere and these stars represent 26 states of Brazil and the Federal District.

So, you know the meaning of the flag of Brazil, let’s scroll down to know its history.

History Of The Brazil Flag

The neighboring countries of Brazil are,

The official or national language of Brazil is Portuguese. It is because, in the past, Brazil was a colony of Portugal.

The currency of Brazil is the Real and it is written as BRL and denoted by using a symbol of R $. Currently, 1 United States Dollar is equivalent to 5.28 Brazilian Real.

This is the Map Flag of Brazil. 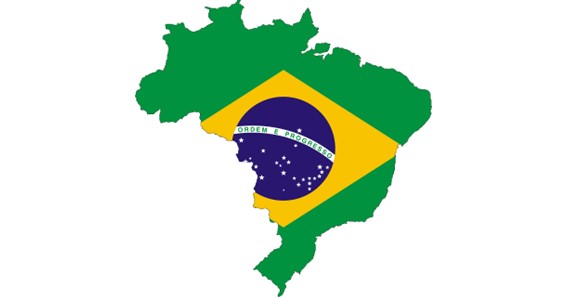 What Is The History Behind Brazil’s Flag?

What Do The Words On Brazil’s Flag Mean?

Its appearance. The Brazilian flag is bright green with a yellow diamond in the center filled with a blue globe. Within the blue globe are some stars – 27 to be exact – and a white banner with the country’s slogan: Ordem e Progresso, which means Order and Progress.

What Does Brazil Symbol Mean?

The green color is a symbol of the flora and fauna of Brazil, the yellow represents gold, and the blue globe and stars symbolize the night sky filled with stars and constellations (a group of stars that form a pattern) that also stands for the country’s states.

What Does The Diamond Mean On Brazilian Flag?

The green of the flag represents the family of Emperor Pedro I of Brazil, while the yellow diamond in the center of the flag symbolizes Pedro I’s wife, Empress Marie-Leopoldine of Austria, and the Hapsburg empire that ruled there. Inside the diamond is a blue circle with stars, an imperial coat of arms.

In this article, you came across the flag of Brazil and know everything regarding this flag. You also got information about the old or the first flag of Brazil. The flag of Brazil carries various hidden meanings within it in the form of colors, but now you know these hidden meanings. There are strict rules that govern the use of the national flag. And most of the rules were adopted on 19th November for the American etiquette for their flag. So, this is all about the Brazil flag.

Above We Have Written All About the Flag Of Brazil

What Is The Flag Of Country Brazil ?

What Does Flag Of Brazil Symbolize?

What Does Flag Of Brazil Mean?

What Does The Flag Of Brazil Represent?

What Is The Meaning Of Brazil Flag?

How Many Colors Are In Brazil Flag?

The Meaning Of Brazil Flag

Which Colour Is The Flag Of Brazil ?

What Does Colours Of Brazil Mean?

Which Is The Flag Of Brazil ?