The Congolese flag is simply designed but it is amazing and looks very attractive due to its perfect color combination. When it waves in the sky you can take your eye off it. So, here I will give you the meaning and also the history of such a beautiful flag. In this article, I will explain the meaning of each and every color and symbol. Then, let us start without delay and know about the Congolese flag.

What Is Congolese Flag?

The Congolese flag is the sky blue flag, adorned with a yellow star in the upper left canton. It is the flag with red stripe diagonally cut with a yellow fimbriation. The proportion of this flag is 3:4.

It was adopted on 20th February 2006, promoting a return to a flag similar to that flown between 1963 and 1971, with a change from a royal blue to sky blue background. There are no strict rules regarding the use of the flag therefore, here you can buy Congolese flag clothes.

So, let us understand the Congo flag meaning.

What Is Congolese Flag Meaning?

The Congolese flag meaning is as simple as its flag.

And the national flag of the Democratic Republic of the Congo is somewhat similar to the flag of the Philippines. So, here we go to learn the history of the flag of Congolese.

The History Of Congolese Flag

The history of the Congolese flag is very important because it will give you information about flags that existed before the current flag.

The old Congolese national flag was adopted in 2003 and it was similar to the flag used between 1960 and 1963. That flag was based on the flag which was originally used by King Leopold’s Association Internationale Africaine and was first used in 1877.

Later, from 1877 the flag continued as the flag of the Congo Free State after the territory was recognized as an official possession of Leopard II at the Berlin Conference. Finally, on 30th June 1960, Congolese was liberated from Belgium, the same basic design was maintained.

However, 6 smallest stars were added to the house to symbolize the six provinces of the country at the time but this design was used only from 1960 to 1963. After that, the flag of the 2nd Republic of Mobutu Sese Seko became the official symbol after Mobutu established his dictatorship.

Again the flag changed when the country was renamed Zaire in 1971. In 1997, the country had thrown out the Mobutu government and acquired the current designation of the Democratic Republic of the Congo. So, the country reverted to the 1960s old design, featuring a single large star and 6 smaller stars.

The most recent changes include the color modification with a lighter shade of blue and it has been flying since 2006.

The Neighboring Countries Of Congolese

The neighboring countries of Congolese are

The Republic of Congo is also known as Congo-Brazzaville, is a country located on the western coast of Central Africa. And Brazzaville is the Congo capital.

The official language of Congolese is French and other languages are Lingala and Kituba.

The currency of Congolese is the Central African CFA franc (XAF).

The climate of Congolese is consistently year-round, with the average day temperature a humid 75 degrees F and heights generally between 61 degrees F.

Congo Map Of The Flag

Congo map of the flag is. 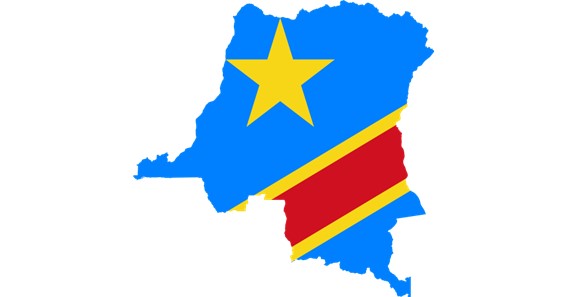 What Is The Current Flag Of Congo?

The current flag of Congo is a sky blue-colored flag with a red stripe diagonally cut sandwiches in white color.

What Does The Congo Flag Stand For?

When Did Congo Change Its Flag?

Congo changed its flag on 30th December 1969 because the new Marxist regime altered the national flag.

What Race Are Congolese People?

There are so many races in Congolese such as Mongo, Luba, Kongo, and the Azande.

Can I Buy Land In Congo?

The new constitution of DRC guarantees the right of individuals to private ownership of property. It also encourages and watches over the security of foreign investment. Nor land is prohibited to foreign ownership.

What Is The History Of The Congo Flag?

The red symbolized the people’s blood; the yellow symbolized prosperity; the blue symbolized hope; and the star represented unity. The flag changed again when the country was renamed Zaire in 1971.

So, you know the design and construction of the Congolese Brazzaville flag along with its history and meaning. Now, you become known to each and every color and symbol that is mentioned on the flag. The Republic of Congo or the Congo Republic or simply either Congo or the Congo has multiple religions, ethnic groups, languages, and provinces but they all are united by their one flag which is the Congolese flag.

Above We Have Written All About the Flag Of Congolese

What Is The Flag Of Country Congolese?

What Does Flag Of Congolese Symbolize?

What Does Flag Of Congolese Mean?

What Does the Flag Of Congolese Represent?

What Is The meaning of Congolese’s Flag?

How Many colors are In Congolese’s Flag?

The meaning of Congolese’s Flag

Which Colour is the Flag Of Congolese?

What Does Colours Of Congolese Mean?

Which Is The Flag Of Congolese?

To Know Some Great Stuff Do Visit ZipCodesPro

To Know Some Great Stuff Do Visit WhatIsFullformOf

To Know Some Great Stuff Do Visit WhatIsMeaningOf

To Know Some Great Stuff Do Visit WhatIsss

To Know Some Great Stuff Do Visit disadvantagess