The Cuba flag is one of the unique flags in the world. And, here I am going to give you the meaning and history behind the flag of Cuba in detail. The national flag of Cuba represents the nation within the country as well as the outside of the country in the games, events, and also for political work. Do you know? Cuba is the largest island in Cuba and the Caribbean. So, without doing too much discussion and wasting your valuable time let us learn about the Cuba flag.

What Is The Cuba Flag?

The Cuba flag consists of five alternating stripes and a red equilateral triangle at the hoist, within which is a white five-pointed star. Out of five alternative stripes, three stripes are blue and two stripes are white. The flag is referred to as the Estrella Solitaria or the Lone Star flag.

The upper stripe of the blue color and then white-colored stripe. The dimensional ratio of the flag is 1:2. The flag of Cuba is similar to the flag of Puerto Rico but with a few differences. Let us understand these differences.

So, this is all about the Cuba flag colors and let us understand the meaning behind these colors.

What Is The Cuba Flag Meaning?

The Cuba flag meaning is about the colors and the triangle used.

The History Of The Cuba Flag

The history of the Cuba flag is given below,

While fighting against the Spanish Crown with the rebel armies of Venezuela, Narciso Lopez shifted from his native Caracas to Cuba. and in 1849, he moved to New York City, where he continued to advocate for an independent Cuba.

The same flag was used by Lopez to carry out his coup attempt to liberate Cuba from Spanish rulers in 1850. Unfortunately, he failed. One year after the war, the first Constituent Assembly of the Republic of Cuba met arms in Guaimaro.

So, Cuba officially became independent on 20th May 1902, then they hosted the flag with honor.

The Neighboring countries of Cuba are

Cuba is the country located where the northern Caribbean Sea, Gulf of Mexico, and the Atlantic Ocean meet. Havana is a Cuba Capital.

The official language of the Republic of Cuba is Spanish and other spoken languages are Haitian Creole and English.

Cuban Peso (CUP) is the currency of Cuba.

In Cuba, there is a drier season from November to April and a rainy season from May to October.

The flag of Cuba map is. 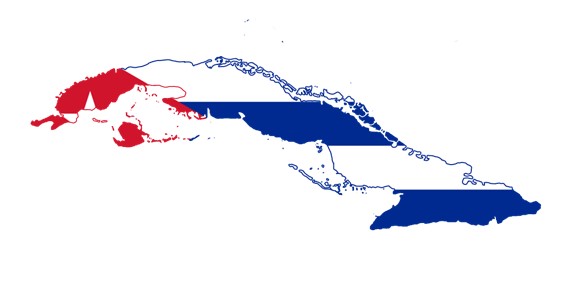 Why Is Cuba And Puerto Rico Flag The Same?

There is no reason behind the similarities of the Cuba and Puerto Rico flag but it is accidental. Also, both flags are not exactly the same but have a few differences that are mentioned above.

What Is The Meaning Behind The Cuban Flag?

The meaning behind the Cuban flag is,

Blue means the sea surrounding the Cuban island, white means the purity of the national movement. The red triangle means the blood of the people who died in the battle of liberty and the white star means independence.

No country owns Cuba. Cuba is an independent country that got nominal independence as a de facto United States protectorate in 1902. But it was once owned by Spain from the 15th century and it was the colony of Spain until the Spanish-American war of 1898 when America occupied Cuba.

What Is Cuba Known For?

To Know Some Great Stuff Do Visit AllForMens

To Know Some Great Stuff Do Visit Anamounto

To Know Some Great Stuff Do Visit AskCorran

To Know Some Great Stuff Do Visit ATSMotorSports

To Know Some Great Stuff Do Visit BeingCost

To Know Some Great Stuff Do Visit Techkorr