You might have seen the England flag in the news. But, do you know the history and meaning of it? Wait, don’t run to search for it. Stay here and read this article till the end, it will give you everything about the flag of England in detail. England is a country that is part of the United Kingdom. Do you know? England is famous for various things like Fish and Chips, David Beckham, black cabs, Oasis, Blur, the Beatles, London, Big Ben, Red Buses, and tea. Also, the country is popular for its Royal Family. Now, let’s come to the main topic and learn about the England Flag.

What Is The England Flag?

The England flag contains a white-fimbriated symmetric red cross on a white field without any other symbol or coat of arms. Currently, the flag of England still sees widespread use as a symbol of England, though it is not used as a military banner any more as the British Armed Forces now use its own logo or the Union Jack as a symbol instead of the flag of England.

Now, you know about the New England flag, let’s know its meaning and history in detail.

What Is The England Flag Meaning?

The flag of England is derived from Saint George’s Cross. The association of the red cross as an emblem of England can be traced back to the Late Middle Ages when it was slowly, increasingly, used alongside the Royal Banner. In the flag of England, the white color represents peace and honesty and the red represents bravery, strength, and valor.

The union flag can be flown by any organization or individual in Great Britain on any day of their choice.

Let’s take a look at the history of the flag of England.

History Of The England Flag

The neighboring countries of England are,

To understand England in detail, take a look at the facts given below. They will tell you the language, currency, population, area, food, sports, and weather of the country.

The official language of England is English. But, there are also some other popular languages including Gaelic, Welsh, and Ulster Scots.

The population of England is 55,977,178 as of 2022. And out of the total population of the country is largely concentrated around London. London is the capital of England.

The country has a temperate maritime climate, with mild winters and summers. England’s proximity to the Atlantic Ocean has an important influence on its climate. The coldest months in the country are January and February, the latter, particularly on the English coast. While July is normally the warmest month.

This is the Map Flag Of England 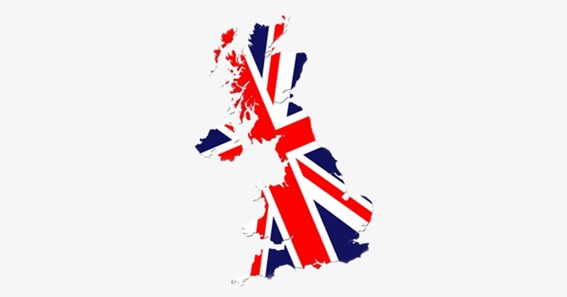 What Does England’s Flag Represent?

The Union Flag, or Union Jack, is the national flag of the United Kingdom. It is so called because it combines the crosses of the three countries united under one Sovereign – the kingdoms of England and Wales, of Scotland and of Ireland (although since 1921 only Northern Ireland has been part of the United Kingdom).

Why Does England Have A Red And White Flag?

The St. George’s flag, a red cross on a white field, was adopted by England and the City of London in 1190 for their ships entering the Mediterranean to benefit from the protection of the Genoese fleet. The English Monarch paid an annual tribute to the Doge of Genoa for this privilege.

Why Is England’s Symbol A Lion?

The Lion derived from the coat of arms of the Duchy of Aquitaine – Eleanor’s family. Naturally, of course, the Lion as a symbol of British “pride” and might was forever identified with Eleanor’s irascible, irresponsible but fearless son, Richard I the Lionheart.

Why Is Great Britain And England Flag Different?

Above We Have Written All About the Flag Of England

What Is The Flag Of Country England ?

What Does Flag Of England Symbolize?

What Does Flag Of England Mean?

What Does The Flag Of England Represent?

What Is The Meaning Of England Flag?

How Many Colors Are In England Flag?

The Meaning Of England Flag

Which Colour Is The Flag Of England ?

What Does Colours Of England Mean?

Which Is The Flag Of England ?