What Is The Flag Of Colombia?

The flag of Colombia has three color stripes and every strip tells us a different meaning. The upper strip is of yellow color, the middle stripe is of blue color and the lower strip is of red color. The ratio of these three-color strips is 2:1:1 so the yellow strip is bigger than the other two strips of Blue and Red.

Colombia flag is different from most of the other tricolor fags, either vertical or horizontal, in having strips that are not equal in size. Here, on this flag, you can see the horizontal color stripes.  The color of the Republic of Colombia Flag was not selected officially and has not been established by law. Now, you have understood the color combination of Colombia’s flag so, it is time to learn the flag colour meaning.

What Is The Meaning Of Flag Of The Colombia?

The flag of Colombia meaning is different for the different colors. The flag color meanings are significant and are the main factor of the flag. In Colombia’s flag, the color of the upper strip which is yellow represents the riches of the country, the wealth of the Colombia soil, the gold, Sovereignty, harmony, justice, and agriculture, as well as the Sun, the source of light.

History Of Flag Of Colombia

Francisco de Miranda basically created the common yellow, blue and red flag of Gran Colombia that Colombia, Ecuador, and Venezuela, with slight variations, share today. Miranda wrote a letter to Count Simon Romanovich Woronzoff and philosopher Johann Wolfgang Goethe at a party in Weimar during the winter of 1785.

Later, Miranda designed his flag, he recalled seeing a fresco by Lazzaro Tavarone in the Palazzo Belimbau in Genoa that depicted Christopher Colombus unfurling a similar-colored flag in Veragua during his 4th voyage.

In the 1801 plan for an army to liberate Spanish America, which Miranda submitted unsuccessfully to the British cabinet, he requested the materials for “ten flags, whose colors shall be red, yellow, and blue, in three zones”. So, the first flag was not raised until 12th March 1806.

The neighboring countries of Colombia are

Colombia or the Republic of Colombia is a transcontinental country located in South America and an insular region in North America. Let us know some facts about Colombia.

The language of Colombia is Spanish but the regional languages are English, Quechua, Portuguese, and 65 other languages.

Here, the climate is tropical in nature and it depends upon the altitude, temperature, humidity, winds, and rainfall.

This is the Map Flag of Colombia. 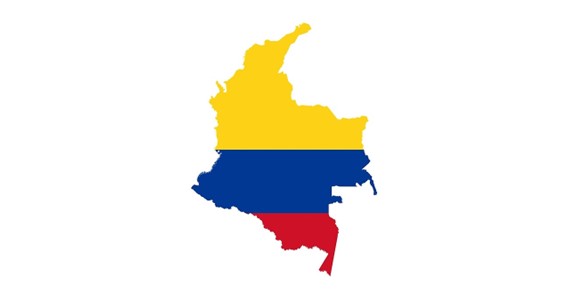 Why Do Ecuador And Colombia Have The Same Flag?

Ecuador and Colombia have the same flag because at independence in 1822 they formed a confederation. They got separated in 1830 but retained the same flag whose design is attributed to freedom fighter General Francisco Miranda.

What Is The Meaning Of Colombia’s Flag?

Why Is There More Yellow On The Colombian Flag?

There is more Yellow on the Colombian flag because it represents the gold abundant in Colombia.

Not surprisingly one of these, the Andean Condor, is Colombia’s national symbol.

Did Colombia Get Their Flag From Haiti?

The flag was designed in Haiti by Francisco Miranda, the Caribbean island country where the revolutionary Simon Bolivar was planning Colombia’s independence.

Above We Have Written All About the Flag Of Colombia

What Is The Flag Of Country Colombia?

What Does Flag Of Colombia Symbolize?

What Does Flag Of Colombia Mean?

What Does the Flag Of Colombia Represent?

What Is The meaning of Colombia’s Flag?

How Many colors are In Colombia’s Flag?

The meaning of Colombia’s Flag

Which Colour is the Flag Of Colombia?

What Does Colours Of Colombia Mean?

Which Is The Flag Of Colombia?

To Know Some Great Stuff Do Visit searchitz

To Know Some Great Stuff Do Visit restartto

To Know Some Great Stuff Do Visit mixbu

To Know Some Great Stuff Do Visit zoominks

To Know Some Great Stuff Do Visit zoomoutme