What Is The Flag Of Nicaragua?

The national flag of Nicaragua also contains a triangle, volcanoes, rising sun, Cap of Liberty, and rainbow and all appeared on the original emblem. It has three bands, the upper band is of azure color, the middle band of white color, and the lower band of azure color. And the triangle is placed on the white color band.

The presence of a rainbow in the coat of arms makes Nicaragua’s flag one of the two flags of a sovereign state to include the color purple, alongside the flag of Dominica. So, knowing the colors of Nicaragua flag lets us know its meaning.

What Is The Flag Of Nicaragua Meaning?

Nicaragua’s flag has two blue or azure strips and it represents the Pacific Ocean and the Caribbean Sea. However, the white-colored stripe represents peace. But, a modern interpretation indicates that the color blue symbolizes justice and loyalty.

Now, you know the meaning of the Nicaragua flag colors and also the symbols, let us learn some historical facts about the world flag of Nicaragua.

The History Of Nicaragua Flag

The history of the Nicaraguan flag will tell you everything about it in detail.

Nicaragua’s flag was firstly adopted on 4th September 1908 but not made official till 27th August 1971. In 1823, the flag of the United States of Central America was used as the civil flag of Nicaragua. In the period between 1852 and 1854, an unofficial white-yellow-red horizontal tricolor with the green mountain was attributed to Nicaragua. In 1854 a yellow-white-tan horizontal tricolor national flag was officially adopted.

The neighboring countries of Nicaragua are

The Republic of Nicaragua is the largest country located in the Central American isthmus.

The official language of Nicaragua is Spanish and other languages are English, Miskito, Rama, Sumo, Garifuna, etc.

The climate of Nicaragua is tropical in nature, with little seasonal variation in temperature, which varies between 21 degrees C to 27 degrees C.

The flag map of Nicaragua is. 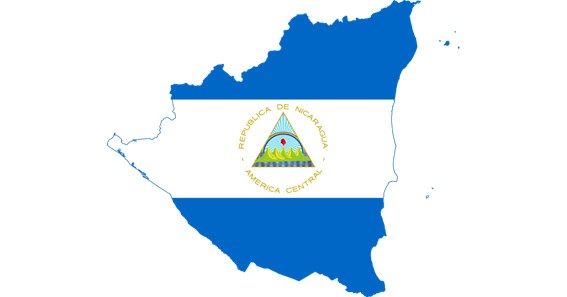 What Does The Symbol On The Nicaraguan Flag Mean?

The symbol on the Nicaraguan flag contains a triangle that means equality, a liberty cap for freedom, five volcanoes between two oceans.

Where Is The Purple In Nicaragua Flag?

The Nicaragua fag has two strips of blue color one is the upper strip and the second is the lower strip and it represents the ocean.

What’s In The Middle Of The Nicaragua Flag?

In the middle of the Nicaraguan flag, there is the coat of arms of Nicaragua. And, this is very similar to the arms of the historical United Province of Central America and features five volcanoes.

The flag of Nicaragua looks like three horizontal bands of blue on the top and bottom and the white color band in the middle.

What Is Nicaragua Best Known For?

Nicaragua is famous for a lot of lakes and volcanoes. The two largest fresh water lakes in Central America, Lake Managua and Lake Nicaragua, are located there. The country has a population of 6.2 million people.

From this article, you have learned the flag of Nicaragua’s meaning and its history in detail. Nicaragua’s flag is one of the only two national flags that currently use purple. It has a triangle at the center and the triangle contains various other symbols including the rising sun, Cap of Liberty, and the rainbow. So, after reading this article you will never forget about the fag of Nicaragua.

Above We Have Written All About the Flag Of Nicaragua

What Is The Flag Of Country Nicaragua?

What Does Flag Of Nicaragua Symbolize?

What Does Flag Of Nicaragua Mean?

What Does the Flag Of Nicaragua Represent?

What Is The meaning of Nicaragua’s Flag?

How Many colors are In Nicaragua’s Flag?

The meaning of Nicaragua’s Flag

Which Colour is the Flag Of Nicaragua?

What Does Colours Of Nicaragua Mean?

Which Is The Flag Of Nicaragua?

To Know Some Great Stuff Do Visit Oldestly

To Know Some Great Stuff Do Visit NationalParkss

To Know Some Great Stuff Do Visit Knowexamples

To Know Some Great Stuff Do Visit resettgo

To Know Some Great Stuff Do Visit uzzers

Why Ethiopia flag is so special? To know this, go through this article. Ethiopia, officially the Federal Democratic Republic of Ethiopia, is a country located in the Horn of Africa. It is a landlocked country. Ethiopia is one of the poorest countries, with a per capita gross national income of $890. But, the country is […]

Do you know? How does the Latvian flag look? If you don’t know, then don’t worry about it. Because I am here to give you answers to such questions in detail. However, the meaning of the Latvian flag along with its history. So, continue reading till the end. Now, let us move forward without further […]