The flag of Slovakia is very interesting to know. Slovakia is also known as The Slovak Republic which is located in Central Europe. The most amusing thing about this country is that it has the most castles and chateaux (very large houses)i.e. 180 castles and 425 chateaux. Even though it is not even half of the size of New York State. Now let us skip to the answer to your query that is What’s the flag of Slovakia?

What Is The Flag Of Slovakia

The Flag of Slovakia has 3 horizontal stripes that are divided into equal parts having white, blue, and red coloured.  It has a coat of arms that has a shield with a white border and 3 mountains in blue and 2 crosses.

The shield around the coat of arms is sized as half of the flag’s width and is placed in between in such a way that it is above all three colors.

What Is The Flag Of The Slovakia Meaning

The mountains represent the three mountains that surround the country that is Tatra, Fatra, and Matra.

Talking about the two crosses, they represent Orthodox Christianity.

The three colors on the flag are unity and independence.

Keep reading to know the history of Slovakia’s Flag.

History Of Flag Of Slovakia

In April 1848 Slovakia has its first flag that was red and white in color that was fluctuated in a theater performance. Some days after that, a petition was signed that demanded constitutional and education rights with a request about accepting the red and white flag. Soon it was rejected by the Hungarians.

In a few months, the color blue was added to the flag that was used by the people on the Hungarian- Moravian border. They had many variations of them some also had the Hungary coat of arms on them with green mountains.

The flag now is inspired from the 1868 flag where the 3 colors were used in the US by the Slovak association.

The present flag was raised in the Castle of Bratislava on the 3rd of September 1992.

The neighboring Countries of Slovakia are Austria, Hungary, Ukraine, Czech Republic. It has Poland in the south.

As you saw that Slovakia’s Flag has an interesting meaning the country itself is also very attractive. It ia a country of mountains that is on the bank of the Danube and Bratislava is the capital of Slovakia.

The language of Slovakia is Slovak but the other languages spoken here are Hungarian and Ukrainian.

The weather here is cold and gets colder in winters but summers are cool here.

The most loved food here is Pork, steak, and chicken whereas is wine is the drink that is most consumed. Bryndzove Haluisky is the most popular dish here that is made of sheep cheese and potatoes.

This is the Map Flag Of Slovakian 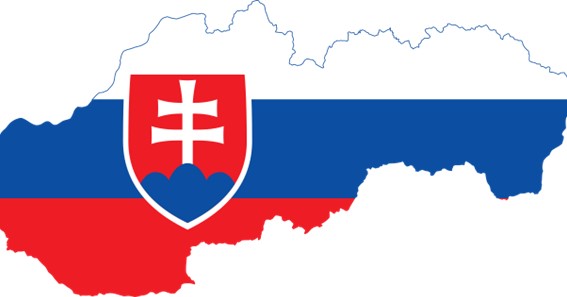 What Does The Symbol On The Slovakian Flag Mean?

The mountains represent the three mountains that surround the country that is Tatra, Fatra, and Matra.

Talking about the two crosses, they represent Orthodox Christianity.

The three colors on the flag are unity and independence.

Why Does Slovakia Have Double-Crosses?

The double-cross, on the Slovakia Flag, represents Orthodox Christianity and their faith in Christianity.

What Is Slovakia Known For?

Slovakia is known as a mountainous country that is famous for its national parks, beautiful hiking trails, and many hundreds of caves.

Is Slovakia A Poor Country?

It is not right to say Slovakia is a poor country or not as per the World Bank it has a poverty rate of 12.6 percent.

What Language Do Slovaks Speak?

As you opened this page with a curiosity of knowing about the flag of Slovakia you must have got all the answers by now. As a beautiful mountainous country, Slovakia is we can say the same for the flag. The flag represents unity, peace, and also the faith in Slovakian people have in Christianity. I am sure if not that you will definitely plan a visit to the nature loved place after knowing all about flag of Slovakia.

Above We Have Written All About the Flag Of Slovakia

What Is The Flag Of Country Slovakia?

What Does Flag Of Slovakia Symbolize?

What Does Flag Of Slovakia Mean?

What Does the Flag Of Slovakia Represent?

What Is The meaning of Slovakia’s Flag?

How Many colors are In Slovakia’s Flag?

The meaning of Slovakia’s Flag

Which Colour is the Flag Of Slovakia?

What Does Colours Of Slovakia Mean?

Which Is The Flag Of Slovakia?

To Know Some Great Stuff Do Visit savefo

To Know Some Great Stuff Do Visit andactivate