What do you understand by seeing the Gambia flag? No one can find the history and meaning of the flag by just seeing it. Because nothing is mentioned on it. So, to understand the meaning, history, and other important facts about the flag of Gambia. The flag of the Gambia is the resonator of the country and it represents the Gambia in another country during sports events, government meetings, etc. Let us move towards the Gambia Flag and understand it in detail.

What Is The Gambia Flag?

The Gambia flag is the national flag of Gambia, made up of three horizontal stripes of different colors. The upper strip is of red color, the middle stripe is of blue color and the lower strip is of green color. These strips are separated by two thin lines of white color.

The proportion of the Gambia flag colors band is 2:3. It was designed by Louis Thomasi in the year of 1965. This flag was adopted after replacing the British Blue Ensign defeated with the arms of the Gambia Colony and Protectorate.

The Gambia country flag remained unchanged throughout the Gambia’s seven-year confederation with Senegal. So, without knowing the Gambia flag meaning you can not understand the flag of Gambia.

What Is The Gambia Flag Meaning?

The colors of the flag carry political, cultural, and regional meanings. So, the blue color alludes to the River Gambia, which is the nation’s key geographical feature and from which the country derives its name. The red color band evokes the sun, which gives the country close proximity to the Equator as well as the savanna.

However, the thin white colors strip denotes “unity and peace” and the green color band epitomizes the forest and the agricultural goods that the Gambia people are heavily dependent on, both for exports and their personal use. So, if you know the meaning of the flag of the Gambia, let us understand its history.

History Of The Gambia Flag

The history of the Gambia flag gives you further details about it.

In 1661, the British first arrived in what is now the modern-day Gambia, when they conquered James Island. The British started with the construction of forts around the confluence of the Gambia River with the Atlantic Ocean, and slowly expanded its control upstream. Many years passed and ultimately the Gambia became independent in 1965 and they had rejected the British Gambia flag. Later, the winning design for the new flag was created by Louis Thomasi, who worked as an accountant.

Like many countries that do not utilize the colors of the country’s leading political party, since its design has no political basis. After designing, it was first hoisted at midnight on 18th February 1965, the day the Gambia became an independent country.

Later on, the Gambia formed a confederation with Senegal in 1982, but this did not result in the change of national symbol, and the flag continued to be flown during this time.

The neighboring countries of Gambia are

The Gambia is a country in western Africa situated on the Atlantic coast.

The language of the Gambia country is English.

The Gambia currency is Gambian Dalasi GMD. the currency of Gambia was never changed.

The climate of the Gambia country is tropical in nature, with hot and rainy seasons normally lasting from June to November. After that, the temperature is dominant.

This is the Map Flag of Gambia. 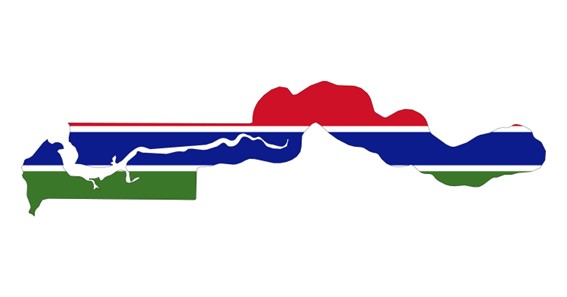 Is Gambia A Poor Country?

Yes, the Gambia is ranked among the poorest countries in the world with a GNI per capita of less than $1,500.

The Republic of the Gambia is the country within mainland Africa and is surrounded by Senegal, except for its western coast on the Atlantic Ocean.

What Is Gambia Known For?

The Gambia is known for its small beaches along its small Atlantic coastline and for being home to Jufureh, the reputed village of Kunta Kinte.

Who Designed The Gambia National Flag?

The Gambia national flag was designed by Louis Thomasi in 1965, who was an accountant in the Gambia country.

What Is The Religion Of Gambia?

What Does Gambia Stand For?

Etymology. The name “Gambia” is derived from the Mandinka term Kambra/Kambaa, meaning Gambia River (or possibly from the sacred Serer Gamba, a special type of calabash beaten when a Serer elder dies). Upon independence in 1965, the country used the name the Gambia.

Above We Have Written All About the Flag Of Gambia

What Is The Flag Of Country Gambia?

What Does Flag Of Gambia Symbolize?

What Does Flag Of Gambia Mean?

What Does the Flag Of Gambia Represent?

What Is The meaning of Gambia’s Flag?

How Many colors are In Gambia’s Flag?

The meaning of Gambia’s Flag

Which Colour is the Flag Of Gambia?

What Does Colours Of Gambia Mean?

Which Is The Flag Of Gambia?

To Know Some Great Stuff Do Visit InstallMo

To Know Some Great Stuff Do Visit AddWez

To Know Some Great Stuff Do Visit LetBecome

To Know Some Great Stuff Do Visit clearchit

To Know Some Great Stuff Do Visit giveve