Are you eagerly waiting to know about the German flag, its meaning, and its history? Simply, scroll down and read this article till the end, you will get everything about the flag of Germany. You might have heard of Germany because it is one of the most popular and developed countries located on the European continent. Officially, the Federal Republic of Germany. In the European continent, Germany is the second most populated country after Russia. Well, the population of the country will be mentioned below along with other facts regarding the country. Without further delay let’s directly come to the point and know the German flag.

What Is The German Flag?

The German flag is not so complex but a simple tricolor flag with three horizontal bands of black, red, and yellow colors. The upper stripe is black in color, the middle stripe is red in color, and the lower stripe is yellow in color. These all colors carry a hidden meaning, below we will discuss it in detail.

The colors used in the flag date back to the republican democracy proposed in the 1800s to represent unity and freedom considered to be prevalent. The flag of Germany is one of the world’s most recognizable flags and has been in continuous official use since 1949. Almost every flag in the world has some history associated with it. Similarly, the flag of Germany also has a history and a special hidden meaning within it.

Let’s know the meaning and history of the flag of Germany.

What Is The German Flag Meaning?

Actually, there are various meanings and theories behind the meaning of the flag of Germany, though they are commonly said to represent freedom and unity. According to student soldiers that were fighting against French occupation in the early 19th century, the meaning of the national flag of Germany was, from the blackness of servitude, through the bloody battles, to the golden light of freedom.

The flag of Germany is notably a tricolor, much like the flag of France, Italy, Romania, Russia, and the Netherlands. The use of the tricolor design was introduced in the 16th century and is a symbol of republicanism and liberty.

To know the flag of Germany in more detail, let’s understand the history associated with it.

History Of The German Flag

The neighboring countries of Germany are,

To know some basic information about Germany, read some important facts given about the country. Let’s have a look,

The currency of Germany is Euro and in short, it is written as EUR, and denoted by using the symbol of €. Currently, 1.06 United States dollars is equivalent to 1 EUR.

As already mentioned, Germany is the second most populated country in Europe after Russia. The population of Germany is 8.31 crores as of 2021.

The total area of Germany is around 375,022 km2 out of which the water-occupied land area is 1.27 sq mi. As per area, the largest city in the country is Berlin.

Most of the region of the country has a temperature climate, ranging from oceanic in the north to continental in the east and southwest. Winters last from the cold in the Southern Alps to cool and are generally overcast with limited precipitation.

This is the Map Flag of German 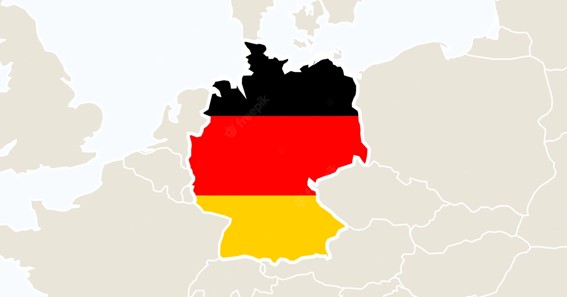 Why Does Germany Have Two Flags?

Since the mid-19th century, Germany has two competing traditions of national colours, black-red-gold and black-white-red. Black-red-gold were the colours of the 1848 Revolutions, the Weimar Republic of 1919–1933 and the Federal Republic (since 1949). They were also adopted by the German Democratic Republic (1949–1990).

What Flag Did Germany Use In Ww2?

The flag of Nazi Germany, officially the flag of the German Reich, featured a red background with a black swastika on a white disc. This flag came into use initially as the banner of the Nazi Party (NSDAP) after its foundation.

Did Germany Copy The Belgium Flag?

The mix-up was attributed to Belgium and Germany’s flags sharing the same color scheme of red, black, and yellow; the design of the flags, however, are very different: Belgium’s stripes are vertical, while Germany’s are horizontal.

What Makes Germany So Rich?

Most of the country’s exports are in engineering, especially machinery, automobiles, chemical goods and metals. Germany is a leading producer of wind turbines and solar-power technology. Annual trade fairs and congresses are held in cities throughout Germany.

After reading this article you come across the meaning and history, and also the German flag colors. There is no symbol or coat or arms designed on the flag of the country. While talking about Germany, is the most famous country because of its Oktoberfest, carnival, ga pride festival, Christmas markets football, hockey, golf, bread, and much to write about. When you visit Germany, then definitely you will see the national flag, then you will get a hint about the German flag.

Above We Have Written All About The Flag Of German

What Is The Flag Of Country German ?

What Does Flag Of German Symbolize?

What Does Flag Of German Mean?

What Does The Flag Of German Represent?

What Is The Meaning Of German Flag?

How Many Colors Are In German Flag?

The Meaning Of German Flag

Which Colour Is The Flag Of German ?

What Does Colours Of German Mean?

Which Is The Flag Of German ?