What Is The Indonesia Flag?

The Indonesia flag is a simple bicolor flag, with two equal horizontal bands namely red band and white band. The upper band is of red color while the lower band is of white color. There is no symbol or sign displayed on the flag. It is just two colored plain fields.

The overall ratio of the Indonesian flag is 2:3. The flag of Indonesia was introduced and hosted in public during the Proclamation of Indonesian Independence on 17th August 1945 at 56 Jalan Proklamasi in Jakarta.

What Is The Indonesia Flag Meaning?

The meaning of the Indonesia flag is very simple to understand.

History Of The Indonesia Flag

The history of the Indonesia flag is given below,

The colors of the flag are derived from the banner of the 13th century Majapahit Empire. However, it has been suggested that the red and while symbolism can trace its origin to the older common Austronesian mythology of the duality of Mother Earth and Father Sky.

This is why these colors appear in so many flags throughout Autranesian, from Tahiti to Madagascar. Later in the 20th century, these colors were revived by students and then nationalists, as an expression of nationalism against the Dutch.

The modern red and white-colored flag was first flown in Java in 1928 and it was adopted as the national flag when Indonesia got independence on 17th August 1945.

Neighboring countries of Indonesia are

The Union Territory of the Andaman & Nicobar Islands

Indonesia or the Republic of Indonesia is the world’s largest island country located in Southeast Asia and Melanesia between the Indian and Pacific oceans.

The official language of Indonesia is Indonesian.

The Indonesian Rupiah (IDR) is the currency of Indonesia.

The climate of Indonesia has two seasons, a wet season and a dry season, with no extremes of summer or winter.

The flag map of Indonesia is. 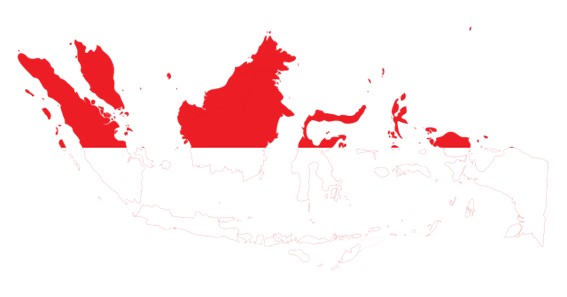 Why Is Indonesia And Monaco Flag The Same?

Indonesia and Monaco flags are the same because the flag of Indonesia dates back to its association with the Majapahit empire, and the flag of Monaco is based on heraldic colors.

Why Is Indonesian Flag Red And White?

The Indonesian flag is red and white because it has been suggested that the red and white colors can trace their origin to the older common Austronesian mythology of the duality of Mother Earth and Father Sky.

Is Indonesian Flag From Dutch Flag?

No, Indonesia officially accepted its flag on 17th August 1945 three days after the conclusion of World War II.

Which Country Flag Is Similar To Indian Flag?

Niger flag is similar to the Indian flag but different by the ratio, color shades, and details of the disc in the center. Also, the meanings of both flags are different.

How Old Is Indonesia?

The concept of “Indonesia” as a nation-state emerged in the early 20th century, culminating later in the proclamation of Indonesian Independence in 1945. However, it was not until 1949 that the Dutch recognised Indonesia’s sovereignty following an armed and diplomatic conflict between the two.

What Is The Story Behind The Indonesian Flag?

The flag, a simple design of red and white stripes, has a long history. It was first associated with the Majapahit empire, which flourished from the 13th to the 16th century in eastern Java, and it incorporates traditional colour symbolism: red for courage and white for honesty.

Above We Have Written All About the Flag Of Indonesia

What Is The Flag Of Country Indonesia?

What Does Flag Of Indonesia Symbolize?

What Does Flag Of Indonesia Mean?

What Does the Flag Of Indonesia Represent?

What Is The meaning of Indonesia’s Flag?

How Many colors are In Indonesia’s Flag?

The meaning of Indonesia’s Flag

Which Colour is the Flag Of Indonesia?

What Does Colours Of Indonesia Mean?

Which Is The Flag Of Indonesia?

To Know Some Great Stuff Do Visit NeoAuthors

To Know Some Great Stuff Do Visit OfsType

To Know Some Great Stuff Do Visit OwnerSites

To Know Some Great Stuff Do Visit PetsBee

To Know Some Great Stuff Do Visit PopularWeby