The Kenya flag is the true inspiration for the people of Kenya. As it spurred the people of Kenya to take inspiration from history and remember the struggle of the freedom fighters. It features some great aspects of the country. Kenya, officially the Republic of Kenya, is a great country located in Eastern Africa. A country with immense tradition and culture, unfinishable history, and overwhelming hospitality. Kenya is popularly known as the world’s best safari destination, with 50 epic national parks and reserves that are home to diverse wildlife, including the big five, lions, leopards, elephants, rhinos, and buffalos. Let’s know more about the country by studying the Kenya flag.

What Is The Kenya Flag?

The Kenya flag is inspired by the Pan-African flag adopted in 1920 by the African Communities and League Universal Nergo Improvement Association. The national flag of Kenya consists of four colors namely black, white, red, and green. The flag has horizontal bands of different colors.

The upped stripe is of black color, below it, there is a red strip and both these strips are separated by a small white border. Below the red strip, there is a green strip located and again both strips are separated with a narrow white border. At the center of the flag of Kenya, a symbol is present, it is called the traditional Masai shield and white spears in the center. The Masai Shield with the crossed spears is red in color with black flanks, 4 white charges, and a white disc in the middle.

What Is The Kenya Flag Meaning?

The Kenya flag is the symbol of national unity and pride of the Kenyan people. It consists of three equal horizontal bands of black, red, and green colors. And a large Masai warrior’s shield covering crossed spears is superimposed at the center of the flag.

The black color represents the people of the Republic of Kenya. The post-office red color positioned in the middle represents the sacrifices and bloody price for freedom from the British colonialists. While the green color positioned at the bottom represents the fertility of the lands and richness in natural wealth. It symbolizes agriculture and national reserves, which form the backbone of the country’s economy.

The white stripes incorporated into the flag in the form of a border represent the peace, honesty, and unity of Kenya. Kenya flag symbol, the Massai shield represents the traditional Masai items that stand for the enthusiasm and readiness to defend the country.

In the middle, there was an emblem of a white cockerel representing the dawn of a new day. After independence, KANU wanted to use their flag as the national flag but Thomas Joseph Mboya, the Justice and Constitutional Affairs minister at the time proposed a different design. The design with two white fimbriations and a traditional Maasai shield with two crossed spears to replace the Cockerel.

The neighboring countries of Kenya are,

Let’s know more about Kenya by knowing some of its significant aspects.

The official languages of Kenya are English and Swahili. English is used in big business, higher education, and government.

The currency of Kenya is the Kenyan Shilling.

In Kenya, most of the places experience average temperature of 85 degrees C or more, while annual precipitation is only about 10 inches in the north and less than 20 in the south.

The flag of Kenya map is. 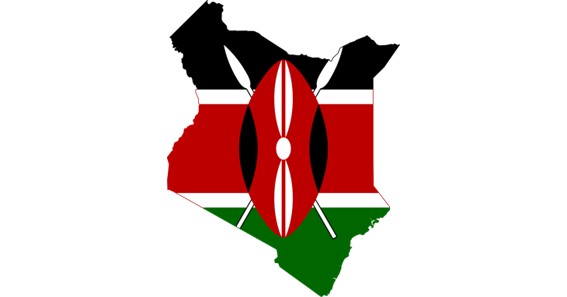 What Does Kenya Flag Represent?

The flag is a black, red, green and white-bordered horizontal tricolour. The red colour represents for the fight for independence; the black represents the people, the green for the landscape and the white for peace and the Maasai shield and spears represent defence.

What Is The Thing In The Middle Of The Kenya Flag?

National flag consisting of horizontal stripes of black, red, and green separated by thinner stripes of white; in the centre are two crossed spears and a shield.

Who Came Up With The Kenyan Flag?

It is not clear who floated the idea of the Kanu flag becoming the national one, but reading through minutes of deliberations of the inter-ministerial committee one sees the hand of Kanu hardliners – who later came together as the so-called Kiambu mafia led by Mr Mboya’s Cabinet colleagues James Gichuru, Mbiyu Koinange.

What Is The Motto Of Kenya?

Kenya’s motto, harambee, means “pull together.” And indeed, since independence in 1963, many citizen-volunteers have helped build schools and health clinics.

What Does Kenya Mean In The Bible?

Why Is Maasai Shield On Kenyan Flag?

The shield (which bears the colours of the national flag) and the spears symbolize unity and defence for freedom. The rooster holding an axe while moving forward portrays authority, the will to work, success, and the break of a new dawn.

In this article, you have learned all about the flag of Kenya in detail. Also, you have understood the meaning of each and every color present in the flag. And the meaning of the Maasai shield symbol. Kenya famed for its scenic landscapes and vast wildlife preserves it. The Indian Ocean coast provided historically important ports by which goods from Arabian and Asian traders have entered the continent for many centuries. So, this was all about the Kenya flag.

Above We Have Written All About the Flag Of Kenya

What Is The Flag Of Country Kenya?

What Does Flag Of Kenya Symbolize?

What Does Flag Of Kenya Mean?

What Does the Flag Of Kenya Represent?

What Is The meaning of Kenya’s Flag?

How Many colors are In Kenya’s Flag?

The meaning of Kenya’s Flag

Which Colour is the Flag Of Kenya?

What Does Colours Of Kenya Mean?

Which Is The Flag Of Kenya?