Have you ever seen the Kosovo flag? No? Then you can read about it with the help of this article and after reading this article you will not need to see it. Like other countries, the flag of Kosovo has a combination of colors and symbols. Below, I will give it to you in detail so, keep reading till the end. However, this article will increase your knowledge about the Kosovo flag meaning up to a certain level. Therefore, without wasting time let us come to the Kosovo flag.

What Is The Kosovo Flag?

The Kosovo flag contains a blue-colored field and it shows six stars in an arc above a golden map of Kosovo. The design of the flag emerged from the international competition that was organised by the United Nations-backed Kosovo Unity Team. and it had attracted almost one thousand entries.

The winning design was proposed by Muhamed Ibrahim. Those six stars on the blue field symbolize Kosovo’s six major ethnic groups such as Albanians, Serbs, Bosniaks, Turks, the Romani, and Gorani. The color of the stars is white. Now, you know the Kosovo flag colors, so, let us learn about its meaning.

What Is The Kosovo Flag Meaning?

The Kosovo flag meaning is not so complicated to understand, you can easily understand it.

The flag of Kosovo has six white stars on the blue field. Now, the question is what do the stars on the Kosovo flag mean? So, the six while-colored stars represent Kosovo’s six major ethnic groups as mentioned above.

While the golden color map is the map of the nation and the blue color of the field does not have a specific meaning.

After knowing the Kosovo flag stars meaning and also the meaning of the symbol of the flag of Kosovo you should learn about the history of the flag.

The History Of The Kosovo Flag

The history of the Kosovo flag is given below.

Until 2008, Kosovo did not have its own flag. It is different that, during the periods of history, different flags were flown in Kosovo. Before 1969, the only flags that could legally fly over Kosovo were those of SFR Yugoslavia and SR Serbia. There was a law that, if a nationalist flag were flown like Albanian, Serbian, or Croatian, a person could go to prison for doing so.

Out of 933, they selected three designs and passed them to the Assembly on 4th February 2008 for the final selection. And it was finally selected by the representative of the people of Kosovo.

The Neighboring Countries Of Kosovo

The neighboring countries of Kosovo are

Kosovo is also officially called the Republic of Kosovo, is a partially recognized de facto sovereign state in Southeast Europe.

The official language of Kosovo is Albanian and Serbian.

The climate of Kosovo is Continental in nature with Mediterranean and Alpine influences.

The total population of Kosovo is 1,935,259 as of the year 2021 while the Kosovo religion is majorly Islam and other minorities include Christianity and others.

The Kosovo flag map is. 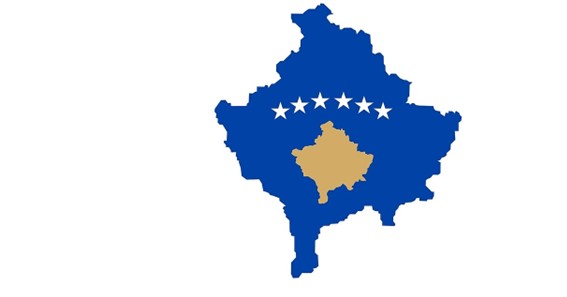 Why Are There 6 Stars On The Kosovo Flag?

There are six stars on the Kosovo flag because it represents Kosovo’s six major ethnic groups such as Albanians, Serbs, Bosniaks, Turks, the Romani, and Gorani.

Is Kosovo An Albanian?

No, but Kosovo belongs to the ethnic Albanian sub-group of Ghegs, who inhabit the north of Albania, Kosovo, Southern Serbia, North of the Shkumbin River, and western parts of North Macedonia.

Is Kosovo A Country Or Not?

Kosovo is the state and not the country, it is the United States formally recognized as a sovereign and independent state.

What Language Is Spoken In Kosovo?

The languages spoken in Kosovo are Albanian and Serbian, both are the official languages of the country.

Why Are There 6 Stars On The Kosovo Flag?

The stars were said to stand for the six predominant ethnic groups of the country (Albanians, Bosniaks, Gorani, Roma, Serbs, and Turks). However, ethnic Albanian and Serbian residents in Kosovo continued to make use of their respective national flags.

What Is Kosovo Called Now?

The official conventional long name of the state is Republic of Kosovo, as defined by the Constitution of Kosovo, and is used to represent Kosovo internationally.

How Old Is The Kosovo Flag?

On 17 February 2008, the Parliament of Kosovo declared independence from Serbia over its objections and adopted a flag and arms. The flag of Kosovo avoids symbols associated with particular ethnic groups. It is blue with a yellow geographical map of Kosovo and six white five-pointed stars forming an arch above it.

In this article, I have given you the meaning and also the history regarding the flag of Kosovo in detail. Kosovo is not a country but it is a state, even though it has its own flag. Above, I have mentioned little but important information about the country to make you well aware of it. So, from today onwards you will never need to search about the Kosovo flag in the future.

Above We Have Written All About the Flag Of Kosovo

What Is The Flag Of Country Kosovo?

What Does Flag Of Kosovo Symbolize?

What Does Flag Of Kosovo Mean?

What Does the Flag Of Kosovo Represent?

What Is The meaning of Kosovo’s Flag?

How Many colors are In Kosovo’s Flag?

The meaning of Kosovo’s Flag

Which Colour is the Flag Of Kosovo?

What Does Colours Of Kosovo Mean?

Which Is The Flag Of Kosovo?

To Know Some Great Stuff Do Visit SnapperNews

To Know Some Great Stuff Do Visit Snorable

To Know Some Great Stuff Do Visit SquareRoott

To Know Some Great Stuff Do Visit StarCasto

To Know Some Great Stuff Do Visit StatusKDuniya