What Is The Latvian Flag?

The Latvian flag is among the oldest flags in the world. The flag of Latvia is made up of two colors that are carmine and white.

Latvia’s flag design is as a carmine field bisected by a narrow white stripe. And the proportion of this flag is 1:2. One of the important facts about the Latvian flag is, the flag was in use as early as the 13th century when many countries did not have a standard flag.

So, let us understand the Latvia flag meaning.

What Is The Latvian Flag Meaning?

The carmine color is sometimes described as symbolizing the readiness of the people of Latvia country to give the blood from their hearts for freedom and their willingness to defend their liberty. But according to one legend, a Latvian leader was wounded in battle, and the edges of the white sheet in which he was wrapped were attained by his blood. In the flag of Latvia, the white stripe represents the sheet that was wrapped around him.

The History Of The Latvian Flag

The history of the Latvian flag is given below

The first mentioned Latvian flag color code was the red-white-red in the medieval Rhymed Chronicle of Livonia, which covers the period from 1180 to 1343. Therefore, the Latvian flag oldest in other flags.

After that, the story of legend happened. That is, one of the leaders was wounded during the battle and then he was wrapped in the white sheet. The part of the sheet on which he lay remained white, but the two edges were stained in his blood. This was the Latvian flag origin. Then, during the next battle, this blood-stained sheet was used as a flag. And Latvia warriors were successful and drove the enemy away.

Based on the aforementioned historical record, today’s flag design was adapted by artist Ansis Cirulis in May 1917.

The Neighboring Countries Of Latvia

The neighboring countries of Latvia are

Latvia is also known as the Republic of Latvia and it is a country in the Baltic region of Northern Europe.

Latvian is officially the Latvia language.

The climate of Latvia is either humid continental or maritime in nature. Here, summers and milder winters are in the maritime climate.

The flag map of Latvia is. 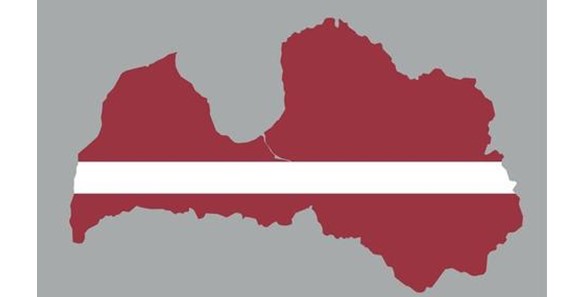 Yes, Latvia is the 3rd poorest country in the field of anti-poverty policy. Also, it is the most marginalized country, with a dramatic increase in the gap between the poor and the rich in recent years.

How Did Latvia Get Their Flag?

Latvia got their flag when one of the legends from the Latvian tribe was killed and his body wrapped in a white sheet. The part of the sheet remained white as his blood stained the rest of the sheet red.

When Did Latvia Get Their Flag?

Latvia got its flag formally on 20th January 1923 but it flew on 18th November 1918 during World War I and the Russian Revolution.

When Was The Latvian Flag Invented?

Students at the University of Tartu, for example, raised a crimson-and-white flag in 1870. During World War I and the Russian Revolution, the flag of Latvia was increasingly displayed. It flew on November 18, 1918, when the Republic of Latvia proclaimed its independence, and it was formally adopted on January 20, 1923.

What Do The Colours On The Latvian Flag Mean?

The white stripe on the flag represents peace, while it also means independence. For Latvia, which has left the Soviet Union, this color and meaning have an important place. In the flag, the chestnut color takes more space than white. Chestnut, as in the flag of many countries, represents the spilled blood in wars.

So, you did learn about the flag of Latvia country in detail, with its design and color. Above, I have mentioned the meaning of each color that is used in Latvia’s flag along with its history. Once you read this article you won’t need to search again about the Latvian flag in the future.

Above We Have Written All About the Flag Of Latvian

What Is The Flag Of Country Latvian?

What Does Flag Of Latvian Symbolize?

What Does Flag Of Latvian Mean?

What Does the Flag Of Latvian Represent?

What Is The meaning of Latvian’s Flag?

How Many colors are In Latvian’s Flag?

The meaning of Latvian’s Flag

Which Colour is the Flag Of Latvian?

What Does Colours Of Latvian Mean?

Which Is The Flag Of Latvian?

To Know Some Great Stuff Do Visit heathhopro

To Know Some Great Stuff Do Visit ofadvantages

To Know Some Great Stuff Do Visit prozgo

To Know Some Great Stuff Do Visit shortestt

To Know Some Great Stuff Do Visit sizesworld