What is the meaning and which colors does the Mexican flag have? Don’t know? Then read this article till the end, it will give you complete information about the flag of Mexico. Wel before knowing about the flag of Mexico, let’s know about Mexico. Mexico, officially the United Mexican States, is a country in the southern region of North America. Mexico is extremely popular for its rich culture, dazzling beaches, ancient ruins, and incredible cuisine.  Without further discussion let’s get started and know about the Mexican flag, its meaning and history.

What Is The Mexican Flag?

The Mexican flag contains three vertical bands of Green, Red, and white colors. The first band from the hoisting side is green and the middle band is white, and the last band is red. There is a coat positioned exactly in the centre of the white stripe. The coat consists of a eagle sitting on a cactus while devouring a serpent that signalled to the Aztec where to found their city namely Tenochtitlan.

What Is The Mexican Flag Meaning?

The symbol positioned on the middle stripe is the Mexican Coat of Arms. The story of the eagle and the cactus dates back to the Aztec Empire, the powerful state that ruled out of Tenochtitlan before the arrival of the Spanish. The Coat of Arms is derived from an Aztec legend that their gods told them to build a city where they sport an eagle and a percent, which is not Mexico city.

In the flag of Mexico, the green colour represents independence, the white color represents the purity of Catholiciam, and the red blood of national heroes.

Let’s take a look at the history of the Mexican flag.

History Of The Mexican Flag

The nighboring countries of Mexico are,

To know Mexico in detail just read these important facts about the country given below. The facts included the country’s language, food, population, area, etc.

There are limitless varieties of food in Mexico. The most consumed food in the country include, Pozole, tacos al pastor, tostadas, chiles en nogada, elote, enchiladas, mole, chilaquiles, and many more to eat.

The population of Mexico is 132,221,266 as of 2022. This population makes the country 10th most populous country and also the most Spanish-speakers.

Mexico is the 13th largest country in the world on the basis of its area. The total area of the country is 761,610 sq mi.

As Mexico is the 13th largest country in the area, so, due to its larger area it has quite varied climate and weather. The climate is tropical with a rainy and dry season and little temperature fluctuating from season to season.

This is the Map Flag Of Mexican 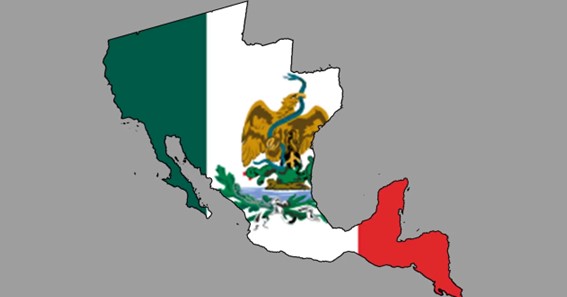 What Does The Mexican Flag Stand For?

Green symbolizes independence, white is for the Roman Catholic religion, and red is for union—the “Three Guarantees” of Iguala.

What God Is On The Mexican Flag?

The eagle on the Mexican flag alludes to an important moment in Mexican history and culture that hails back to the time of the Aztecs. Legend has it that the Aztecs were told by one of their Gods, Huitzilopochtli, that they should look on a lake for an eagle sitting upon a cactus and holding a snake in its talon.

What Is The Story About The Eagle And The Serpent?

An Eagle swooped down upon a Serpent and seized it in his talons with the intention of carrying it off and devouring it. But the Serpent was too quick for him and had its coils round him in a moment; and then there ensued a life-and-death struggle between the two.

Why Is There A Cactus On The Mexican Flag?

The eagle stands on a nopal (cactus plant). The emblem dates back to the time of the Aztecs coming to the Valley of Mexico, and is based on the legend of the founding of the Aztec capital, Tenochtitlan. The legend says that the Aztecs left their home to look for a place to start a new life.

After reading this article, you got to know that the flag of Mexico is made of three colors namely green, white, and red. The national flag of Mexico is also known as the Bandera de. The flag has evolved through time, Mexico officially chose these three colours soon after it won its independence from Spain and established the first Mexican Empire. Also, the coat of arms on the Mexican flag is the most prominent symbol. So, this was all about the Mexican flag.

Above We Have Written All About The Flag Of Mexican

What Is The Flag Of Country Mexican ?

What Does Flag Of Mexican Symbolize?

What Does Flag Of Mexican Mean?

What Does The Flag Of Mexican Represent?

What Is The meaning Of Mexican Flag?

How Many Colors Are In Mexican Flag?

The Meaning Of Mexican Flag

Which Colour Is The Flag Of Mexican ?

What Does Colours Of Mexican Mean?

Which Is The Flag Of Mexican ?