The Norway flag is made up of different colors and carries a symbol also. So, in this article, I will give you details about the flag of Norway including its history and meaning. Read this article till the end. Do you know? The country Norway is also known as the Kingdom of Norway. Now, without further discussion let us come to the topic and learn everything about the Norway flag.

What Is The Norway Flag?

The Norway flag is red with an indigo blue Scandinavian cross fimbriated in white that extends to the edges of the flag. The vertical part of the cross is shifted to the house side in the style of the Dannebrog which is the flag of Denmark. The proportion of the flag of Norway is 11:8.

The producers of the national flag of Norway generally use the red color 200 and blue color 281 from the Pantone color matching system. Do you know? One of the Norway flag facts. That is, during flag hoisting on the festival or ceremonial occasions, they use bugle call, fanfare, or the national anthem.

In Norway, there are no written rules regarding the use of the flag by civilians, so they use it on ceremonial occasions. However, the Norwegian armed forces have a unique bugle call for hoisting and lowering the flag, known as “flaggappell”.

What Is The Norway Flag Meaning?

The cross symbol represents Christinity and its blue color represents the association with Sweden and a white outline added and red color is for Denmark. Other than this, there is no special meaning associated with the colours used in the Norway national flag.

Do you know? The Norway flag similar to the flag of Iceland and Denmark with slight differences. Like, Iceland has the same flag as Norway but with the red and blue colours reversed. It is also called as the Mother of all flags because the norway flag contains other flags also. To know more about the flag of Norway you need to understand the Norway flag history.

History Of The Norway Flag

The history of the Norway flag is given below to make you well aware of it.

The earliest flag of Norway is very complicated and very difficult to establish. In the past, the countries did not fly flags but Kings and other rulers flew flags, especially in battle. The first war flag of independent Norway has a red lion on gold, it is used by Inge but Sverre used an eagle in gold and red.

Later, from about the 16tth century till 1814, Norway used the same flag as Denmark, as it was in Union with that country. So, in 1814 independent Norway adopted the Danish flag and it was used as the state and war flag until 1815 and as merchant flag until 1821.

Then, on 13th July 1821 the Norway flag designed by Fredrik Meltzer but the king refused to sign the flag law, but approved the design for civilian use by royal order in council. But, after that it is used everywhere in the country by the government as well as the civilians.

The neighboring countries of Norway are

Norway or the Kingdom of Norway is a nordic country located in the Northern European continent.

The official language of Norway is Norwegian, sami.

Due to high latitude, Norway has large seasonal variation in daylight. From late May to late July, the sun never completely descends beneath the horizon in areas north of the Arctic Circle.

The flag map of Norway is. 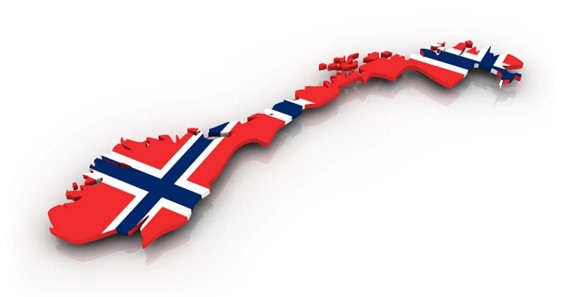 Why Is Norway’s Flag Called The Mother Of Flags?

The Norway flag is called the Mother of Flags because it contains other flags also.

What Does The Norway Flag Represent?

The Norway flag represents Nation Norway and the cross symbol represents Christinity and its blue colour represents the association with Sweden and a white outline added and red colour is for Denmark.

What Country Has The Same Flag As Norway?

Iceland has the same flag as Norway, both have identical designs but with the colours reversed.

Why Do Scandinavian Countries Have The Same Flag?

Scandinavian countries have the same flag because of the countries in the same region having very similar history and are closely related.

Is Norway In NATO?

While Norway has been a NATO member since the military alliance’s founding in 1949, its nearby neighbors, Finland and Sweden, had long preferred to stay unaligned.

What Does Norway Symbolize?

The colors of the Norwegian flag denote the country’s independence and liberty. The indigo blue cross symbolizes the union between Norway and Sweden as well as its past association with Denmark. It’s also a symbol closely associated with Christianity, something you’ll see in many Nordic countries.

So, you become well known for the flag of Norway. Now, you can easily pick-up the Norway’s flag from plenty of other countries’ flags. In the future, if you travel to Norway and then you see its flag, you would recall this flag. Aboe, I have given you the history about Norway’s flag in order to make you more knowledgeable about the Norway flag.

Above We Have Written All About the Flag Of Norway

What Is The Flag Of Country Norway?

What Does Flag Of Norway Symbolize?

What Does Flag Of Norway Mean?

What Does the Flag Of Norway Represent?

What Is The meaning of Norway’s Flag?

How Many colors are In Norway’s Flag?

The meaning of Norway’s Flag

Which Colour is the Flag Of Norway?

What Does Colours Of Norway Mean?

Which Is The Flag Of Norway?

To Know Some Great Stuff Do Visit fixznow

To Know Some Great Stuff Do Visit turnoffme

To Know Some Great Stuff Do Visit turnonx

To Know Some Great Stuff Do Visit MakeMet

To Know Some Great Stuff Do Visit DeleteBy