The color of the Singapore flag holds deep meaning and this article will reveal the meaning behind it. Here, I will make you aware of the old flags of the country along with its history in brief. As we all know, modern Singapore has secured its position in a few developed countries and it has plenty of migrants and tourists. Therefore, you should know about the Singapore flag.

What Is The Flag Of Singapore?

The flag of Singapore is simple yet attractive, it consists of two horizontal halves of two different colors. The upper band is of red color and the lower band is of white color. In the upper band in the left corner, a white crescent moon and five white stars form a circle.

So, after knowing the color and design of the Singapore national flag you should know about the meaning of the flag.

What Is Singapore Flag Meaning?

The Singapore flag meaning tells us about the reason behind the selection of the different colors.

The upper band is of red color symbolizes universal brotherhood and equality of man, while the lower band is of white color represents the pervading and everlasting purity and virtue. Also, the Singapore flag symbol is the white crescent moon, and five white stars form a circle, in which five stars stand for the ideals of democracy, peace, progress, justice, and equality.

The Singapore communist flag, the Union Jack flew over Singapore. Then, the National flag of Singapore was unveiled at the installation of the new Head of State on 3 rd December 1959. And the Yang di-Pertuan Negara when Singapore was granted self-rule by the British Government.

Now, let us jump on to the history of the flag of Singapore.

The History Of Singapore Flag

The history of the Singapore flag is given below,

During the 19th century, Singapore was under British rule so, the flag used to represent the Settlements was a British Blue Ensign defaced with a red diamond containing three gold crowns. One of each settlement was separated by a white inverted pall, which looks like an inverted Y.

However, the Settlement of the county had no separate flag, although the city was permitted a coat of arms that featured a lion in 1911. During World War II, the Japanese occupied Singapore, and the flag used on the land was the national flag of Japan by the military.

As well as the Second World War finished, Singapore became an independent Crown colony and adopted its own flag. Then, the new flag was modified from the Straits Settlements flag to reduce the number of crowns from three to one.

Neighboring countries of Singapore are

Singapore is officially called The Republic of Singapore, which is a country located in the maritime Southeast Asian continent. Singapore capital is Singapore city.

English, Malay, Tamil, and Mandarin are the official languages of the Republic of Singapore.

The currency of Singapore is the Singapore Dollar (SGD).

The total area occupied by Singapore is 283.1 sq mi.

The climate of Singapore is a tropical rainforest in nature, with no distinctive seasons, uniform temperatures, and pressure.

The Singapore flag map is. 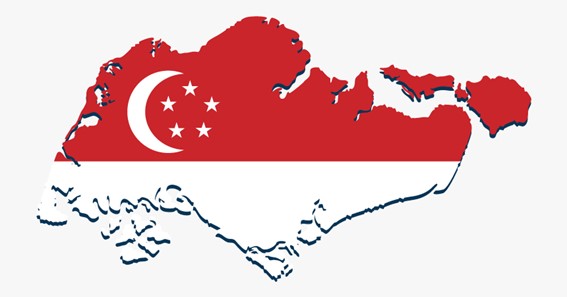 Why Is Indonesia And Singapore Flag Similar?

Indonesia and Singapore flags look similar but they have different meanings. Also, the flag of Singapore has a white crescent moon, and five white stars form a circle which is absent on the Indonesian flag.

What Do The 5 Stars On The Singapore Flag Represent?

The 5 stars on the Singapore flag represent the nation’s ideals of democracy, progress, peace, justice, and quality.

Is Singapore’s Flag A Triangle?

No, the national flag of Singapore is rectangular in shape but the flag used for the commissioned naval ships is a triangular pennant with the crescent and stars on the far left.

No one, Singapore is an independent country, earlier it became part of Malaysia on 16th September 1963.

What Is Singapore’s National Animal?

The lion was chosen as it is a powerful and historic symbol of Singapore’s status as the Lion City and symbolises three national values: courage, excellence and strength. Singapore’s name is itself derived from ‘Singa Pura’ (which means “Lion City”).

What Is The History Of The Flag?

The American flag was designed to represent the new union of the thirteen original states: it would have thirteen stripes, alternate red and white, and thirteen stars, white on a blue field. One of the first flags had the stars arranged in a circle, based on the idea that all colonies were equal.

Above We Have Written All About the Flag Of Singapore

What Is The Flag Of Country Singapore?

What Does Flag Of Singapore Symbolize?

What Does Flag Of Singapore Mean?

What Does the Flag Of Singapore Represent?

What Is The meaning of Singapore’s Flag?

How Many colors are In Singapore’s Flag?

The meaning of Singapore’s Flag

Which Colour is the Flag Of Singapore?

What Does Colours Of Singapore Mean?

Which Is The Flag Of Singapore?

To Know Some Great Stuff Do Visit IncludedNews

To Know Some Great Stuff Do Visit IndiaPlus

To Know Some Great Stuff Do Visit InfoDeath

To Know Some Great Stuff Do Visit JetFamous

To Know Some Great Stuff Do Visit JobEngg